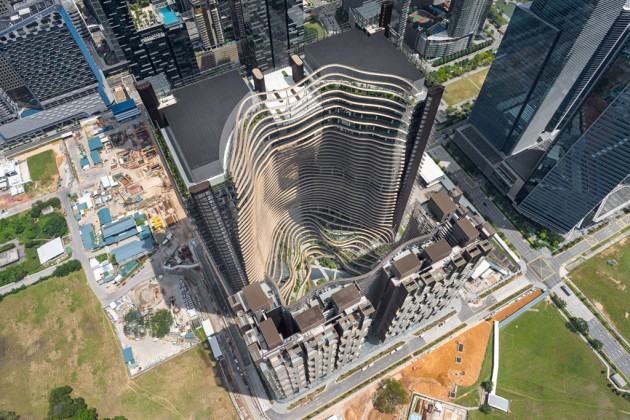 At first sight, Marina One reminds you a rectangular, massive and dark fortress.  Actually, they are four angular separated towers like the sides of a big open box which holds something amazing. Inside, in fact, there is the Green Heart, the green heart of Marina One, a luxuriant tropical garden which goes up from the ground floor to the highest levels of 34 floor towers.

Marina One completes its greenery with an extremely complex facility and it offers a surface dedicated to landscape wider than one fourth, in return. The two L shaped residential blocs are 145-meter-high and include 1042 apartments which overlook water. A bridge at the third floor connects them and holds a spa and an outdoor 50-meter swimming pool, with round windows like a porthole which spread a glimmering light. The towers of offices reach 234 meters and a bridge crosses the distance separating them.

Facebook occupies a whole floor of the bridge, the 28th. Employees enter the towers going up the escalator up to the level 3 of the lobbies where you can find an exhibition of works of art and an auditorium with 300 seats, too. The side of the block with offices which looks the Green Heart takes organic forms: its façades are curved and wavy and they sensually stick out increasing the surface of the highest floors.  At the fourth and fifteenth floors, two outdoor recesses – with a two-level ceiling made of steel which fades into bronze – hold the sky gardens. On the edge of the fourth floor there are the glazed restaurants you have access to through escalators directly from the garden. You reach the underground parking areas and the 18 thousand square meters of shops by the escalators which go down to the entrances, like caves. Since the equator sun is zenith it is screened by up to 33 kilometres of ribbons which work as sunshades, curved and fluctuating all around Green Heart, rolled upper around the towers like winding bands. 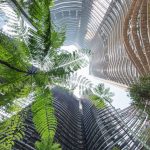 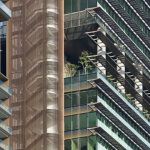 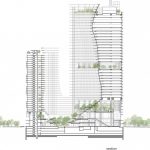 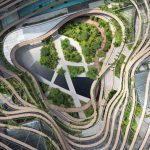 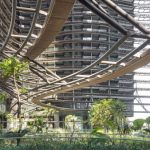 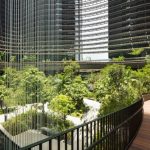 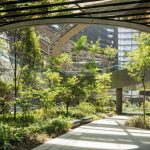 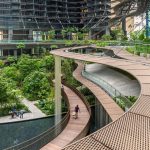 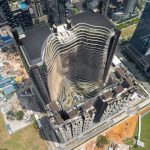 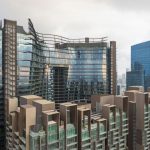